Chris Smith is a serious tattoo collector who I first ran into at the Evergreen Invitational convention that Joshua Carlton puts on in Springfield, Oregon every March. I really liked the guy and thought he had cool energy right away. I could tell he truly loved tattoos.

When I talked to him the first time I realized that he quickly become knowledgable about tattoo collecting. He told me right away that he has been leaving the design completely up to the artist in many cases, and by doing so he has been having top notch pieces land on his body.

Chris didn’t get his first tattoo until he was over 40 years old, but now has a solid collection from some highly respectable artists.

I got to ask him some questions about his recently began tattoo collecting hobby that has been moving very fast.

When did you first become interested enough in the tattoo world that you decided you were going to collect a piece?  Did you intend to build an entire collection from the beginning?  What’s off limits for you?

Honestly, most of my life I hated the idea of tattoos.  My religious beliefs made me question the altering of my body like that.  With that said, I didn’t see the artistry like we see today years ago either.   I think with Ink Master, I saw things I never had before.  After my friend passed in 2016, and my grandma a few years prior, I wanted to get a piece to commemorate them and all of those who I had lost prior.

I went to Evergreen Tattoo Convention 2016 and was fortunate to meet Matt Brown and he had a cancellation for Sunday.   He seemed excited to do a Day Of The Dead Girl for me and his work spoke to me.  As he tattooed me and looking around, I fell in love with the art and culture.   I knew this wasn’t going to be my last piece.  I was hooked.  As he was working we talked about collecting and how artists would love to work on someone like me (large and pale).   From that moment, my deep dive in collecting began.

As for limits, I won’t have my foot tattooed again, nor will I tattoo my face or top of my head.   Everything else is open for the right piece and artist.

Which was your first piece, and by who?  Who have you been worked on by so far?  Include photos if possible.

In no specific order of artists, I have NOT been tattooed by.

Describe the best experience of your tattoo collecting journey thus far? Worst? (leave out the name on that story haha)

Best is really splitting hairs.  I have sincerely loved every tattoo and artist I have been tattooed by.  If I had to pick one, it would be my Joshua Carlton experience. I like to chat and make friends and sometimes I forget this is their job and I’m not their friend.  But through chatting and getting tattooed by Joshua, we have become friends. He is an amazing human being and someone I hope to be tattooed by a few more times.

As for worst, this has NOTHING to do with the art, the artist, or his technique, but my foot tattoo was my worst experience.  The pain was high and due to my health conditions, I had a traumatic experience on the recovery side and now the tattoo never healed properly.  I doubt is ever will and it’s a shame because I absolutely loved the piece and was truly proud of the 7+ hours I had done on the foot. I’m actually ashamed of how it healed I haven’t shared it with the artist as I don’t want to hurt his feelings or have him think I didn’t care for it properly.  Just not a smart tattoo choice for me and my health issues.

Do you have your finger on most of the work you get or do you leave it all up to the artist?

I learned very early (first or second tattoo) that I chose artists for what they do.  Their art speaks to me. Why would I want to alter that and try to make it my own? I give basic guidance like I want a woman’s face or I want a tree or I want a cemetery and then let them do what they do.

What are three changes you really hope to see in the tattoo culture/industry over the next five to ten years?

Honestly so much has changed over the last 5 or so its tough to say.  Rotary machines, Ink, social media, social acceptance, etc. It’s been a whirlwind 5 year for tattooing and I’m just excited to be along for the ride.

Three things you wish you knew before you got your first tattoo?

1.  Its addicting like nothing I have ever done before

Let’s say you had no choice but to restart and decide on ONE artist to do your entire bodysuit…Who are you going with and why?

Mark Wosgerau likely.  Most artists I see today of the caliber I want to collect do other collectors.  So, there is no “one artist” for a whole body. I have seen Mark do a full body suit and it looks amazing.  But any artist I have been tattooed by or want to would do a great job and I would be proud to have their art cover my body.

Name some of the most frequent comments you get walking around on a daily basis. Funniest you’ve ever got? (without intent to be funny.

Funniest: Can I touch it?  I just thought it was weird.  Tattoos are not brail.

My goal is a completely cohesive bodysuit where each piece smoothly flows into one another, containing work from over 40 different artists. Any overall goals for your own tattoo collection?

I too want a full body suit minus my left foot, face and head.  I’m less concerned about the count of artists but do want something fully cohesive.  This isn’t a sprint for me but a marathon but I do want to continue at the pace I have been going with  about 80 hours a year. 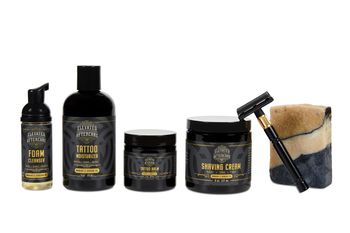